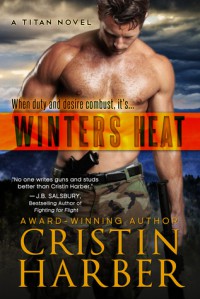 This story starts out great. Colby Winters is sent to extract a package from an airport in what is supposed to be a simple operation. When he gets there he finds not only a group of Russian bad guys moving toward the same package, but a lone woman, Mia Kensington, already there securing it for herself. Thus ensues a series of intense action sequences and a lot of one-on-one time for the leads.

The one-on-one time is where I started to have a problem. It really starts to feel claustrophobic after about 20%. We know there's a group that works with Colby, but we don't get to see them until around 50%. That's when things picked up again for me.

Colby is a commando and Mia is a therapist, mainly working with the military and their families. One of her patients gives her the old "if something happens to me …" and that's how she ends up in this mess. They make a great couple. Both smart, both attractive, both complimenting each other in a variety of ways. The problem is that we're treated to about 10 inner monologues for each of them that remind us how they never do this and this relationship is impossible and what are they thinking. It gets old and the book bogs down.

Also, Colby turns into kind of a squish for a while and that just feels odd when he's the kind of guy who can probably perform surgery on himself while strangling a bad guy and eating a steak at the same time.

After the Titon Group enters the scene things get even more intense and the whole story starts to regain the lost momentum. It takes a while to get their names and types out, but once they're known to the reader they're really engaging.

Despite the use of a very tired trope near the end and some basic story holes, I ultimately found it pretty enjoyable. The excerpt for the next book in the series was very intriguing, so I'll be continuing with this promising series.

I was provided a copy of this book by Netgalley in exchange for an honest review.