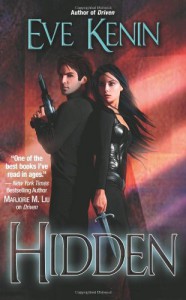 I swing between 4 and 5 for this book but figure, what the hell, I'll give it a five in gratitude for the intense and enjoyable reading experience even though I have some issues.

"Hidden" is the sequel to "Driven". Unfortunately, it's the only sequel and that ain't right. There's at least one more story to be told and I want it!

In "Driven" we were introduced to Wizard. A man who has learned basic human interactions, but not by upbringing. He's a genetically engineered wonder ... in oh so many ways ... and watching him come to life was exquisite. The heroine of "Hidden" is his younger sister, Tatiana. Also stunted in her emotional growth and with a dark background, she's got everything that made Wizard interesting but still has her own personality. She's no retread.

Tristan is the hero of the story and he's got his own dark tale to tell. He and Tatiana meet up in an effort to save the world, both harboring terrible secrets, wanting to trust each other, but knowing they can't trust anyone. Great bones.

The main problem I had with this one and the reason I almost gave it four instead of five stars is that both leads had their secrets but the reader is mostly aware of them. Maybe not the detail, but the essence and that makes things bog down a bit when it starts to feel past time for them to share with each other. Even though it's logical when you think about it that they aren't sharing, it feels contrived after a certain point because the reader's been in the know for so long.

I also missed seeing Wizard, Raina and Yuriko in this book along with the rest of the settlers. It became distracting as I perked up at every opportunity for them to show up. They do eventually, but it's not nearly enough of a taste of those wonderful characters.

Still, the action is harrowing and the romance is satisfying. Tristan and Tatiana are so perfect together it's lovely to see things unfold.

The world-building is excellent. Fascinating, challenging and thought-provoking. I really am saddened that she stopped in 2008 after this one. Ironically, she says Joss Whedon's "Firefly" inspired this world and I feel like I'm having the same experience as fans had with that show: Why did it end?!!! What happened?!!! Just one more! Pleeeeeeasssse! Don't leave it this waaaaayyyyyy!!!

Okay, clearly I'm a huge fan of this book and its predecessor. Even though you'll be left wanting more, it's totally worth it, in my opinion.