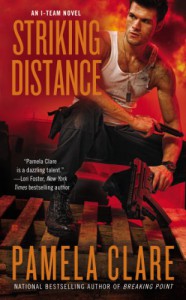 If you’re considering reading Striking Distance and you haven’t yet read First Strike, do that. It’s a short story prologue to SD and it’s only 99 cents. Well worth it as it’s a fantastic short that’s really sexy and romantic.

And having read First Strike, the poignancy of Striking Distance will be even more acute. Both main characters are powerfully damaged and, surprisingly, the female lead is actually emotionally and mentally healthier at the beginning of this story than the hero is. Unexpected once you know what’s happened to her in the time since First Strike’s ending but she’s been working at it while he hasn’t. But her recovery is only slightly further along than his, and this couple does a great job of healing each other with every scene.

The first 50% of the book is very atypical of the I-Team series (which has become, in my opinion, one of the absolute top romantic suspense series published today), and I think fans might feel a bit put off. It’s dark. It’s nuts and bolts. It has a pall of tragedy and horror even as there’s light and recovery visible throughout. It felt sort of like a procedural, if that makes any sense.

After the halfway mark, the story shifts and feels much more like the I-Team tale we’re used to. The romance, the sexy playfulness, the great friendships. It’s all there. But the problems introduced in the beginning are not problems that have easy solutions. Sure, PC could have waved her magic writer’s wand and come up with a paper-thin scenario that would have made it all perfect, but she didn’t. Some may feel that makes the HEA more bitter than sweet, but I disagree. I appreciated the HEA far more for the realism. These are characters who could have been seen as victims, but they just won’t stay down. I really appreciated that. Ugh, I realize that sounds like there wasn’t an HEA when there absolutely is. You’ll have to read for yourself to see what I’m talking about because I don’t want to spoil anything.

Javier and Laura are a lovely couple who put others above themselves time and again, which is exactly how we like our I-Team leads. Strong, compassionate and vulnerable. And hot. Let’s not forget hot. They fulfill all the requirements and it’ll be great to see them pop up in later stories.

I have to say I felt that pall over the story from just how dark it is in the beginning weighs things down a bit. As much as I appreciated the realism, it affected my enjoyment of the story negatively. To be honest, I have an odd trigger with terrorism subjects having been across the river from the World Trade Center on 9/11/01. I can’t explain it and I never know when it’s going to pop up, so there’s that as well. Some may find this too dark, but I’d tell them to stick with it if they can to get to the juicy romantic stuff later. It’s well worth it.

I closed the book with a tear in my eye and a smile on my face and that’s definitely saying something about how I felt about this HEA.